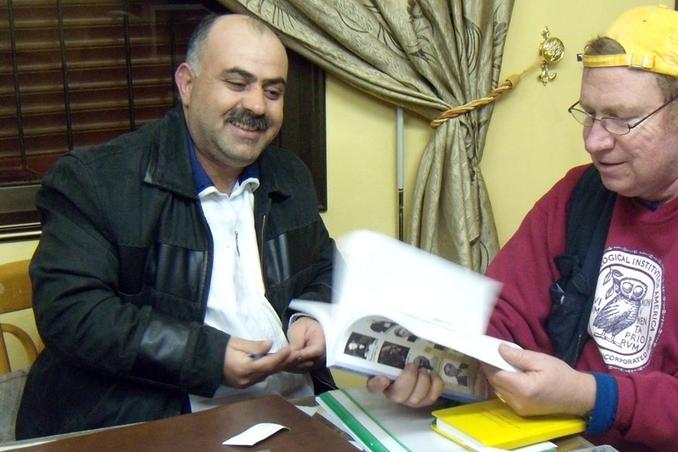 Directly associated with the baptismal font was a limestone reliquary box that still contained human bones. A significant artifact found within the baptistery is a decorated fragment of stone with a clear estrangelo script (Figure 13).

The main body of the cemetery contained 19 graves. Three of the graves were excavated and a full scientific study was performed on grave number 1.

The diaconicon measures 8.3 x 2.45 meters and is situated to the north of the haikal. Under the floor of the third phase were found two clay vats (casks) used to store the wine and a round white colored stone seal engraved with a cross in the center and four crosses around it (Figure 14). 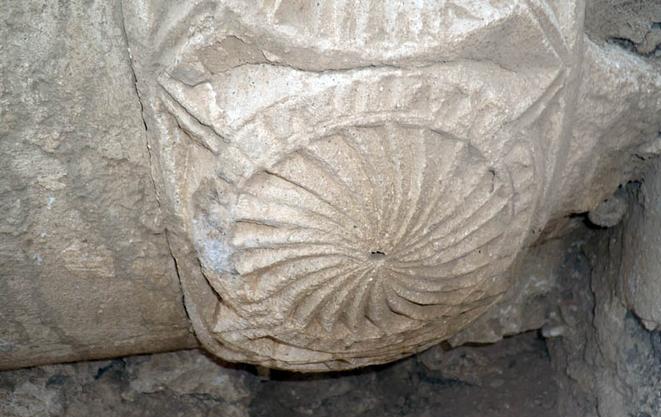 Immediately outside of the cathedral walls is a winepress that measures 2.5 x 4.5 meters (Figure 16).

The diaconicon also contained an oil lamp (figure 15) and parts of a censer chain made from bronze alloys.

The question that is still present for scholars is if Hassake is the city of Mekruz that is mentioned on a map of this period. And also if the Hassake was the city of Makreazy that was mentioned in the Middle Assyrian and Neo-Assyrian cuneiform writings discovered at Tell Sheik Hammad. 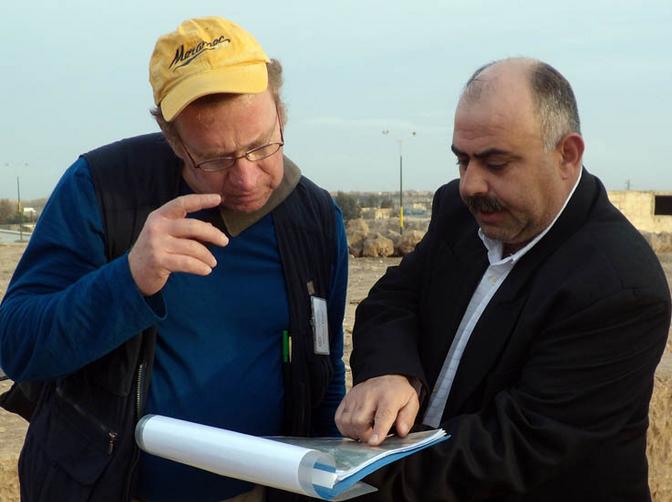 Tell Hassake is located on the North (left bank looking downstream) of the Khabur River at a point 1.7 kilometers upstream on the Khabur River from its confluence with the Jaghjagh River (Figure 1).  The topographic nature of the site consists of two discrete areas. The highest portion of the mound covers 6 hectares while the lower city occupies an area of 54 hectares. The elevated portion of the site was used as a military base during the Mamluk – Ottoman Period, as a French military barracks during the 20th century, then after independence it became known as the Sa’ad Bin Abi Waqqas Barracks.

The archbishop’s seat faced a second seat in the southern colonnade that most likely was reserved for a single clergyman of lower rank. A bench feature on the south wall of the chapel would have seated several clergy. The haikal of the chapel measured 2.1 x 5.1 meters. The entrance to the haikal was decorated with two semi-circular stone pillars.

The footing for an ambo in the center of the "Late Phase" nave was very clear. View looking East.

Entrance to the Eastern Christian complex was from the north side through a main door, from a doorway connecting to a corridor on the west side and from the south side. The overall dimensions of the religious complex measures 31 meters (east-west) by 18 meters (north-South); walls are preserved in some sections to a height of 2.34 meters.

The nave of the Cathedral measures 21 x 16 meters. It consists of three galleries (north, middle and south). The floor of the nave was tiled with baked mudbricks that measured 28 x 28 cm. The roof of the nave was supported by four columns with capitals decorated with geometric shapes.

The seat for an archbishop was situated in the northern colonnade. The middle colonnade contained an ambo that was connected to the haikal by a small stage and three steps. The nave of the cathedral had a capacity to accommodate around 600 to 650 worshippers.

Within the haikal are the remains of the altar which was built of four columns that are 1 meter high and 2 meters apart. The baptistery measured 3.45 x 2.85 meters and is situated immediately south of the haikal (Figure 12).

A cemetery was situated on the north side of the cathedral; the burials are oriented east-west. Three graves lay in an 8 x 2 meter area; they are demarked by a decorated semi-circular stone pillars enclosed by a wall from the east.

The new archaeological discoveries at Tell Hassake have added new information about the history of the area during the Early Christian period. Through the comparison between what has been discovered in this site and other close sites such as Tell Tuneinir, with which it is highly probable, that there was direction relationship during this period, and faraway sites such as the Bazian church in Suleimaniye (Iraq) and other churches in the Republic of Armenia and Europe.

Broken fragment of stucco column with a basket weave style decoration resembling Byzantine capitals from a number of sites including Abila, Apamea, etc.

Summary: The presence of ancient churches along the Khabur River in Syria has only come to light since the 1980s. Similarities as well as differences between the churches at Tell Tuneinir and Tell Hassake indicate that Syriac speaking Christian communities thrived during the time of the Umayyad and Abbasid Caliphs, but dwindled and vanished during the time of the Ayyubid/Mamluk caliphs. Several examples of decorative art suggest a common artistic community with ties linking to the Armenian and Church of the East communities.

Special thanks to Jabr Dumit (St. Louis University) for translating the text concerning Tell Hassake that was written in Arabic by Abdul Masih Hanna Baghdo.

Excerpt of a lecture text prepared by Abdul Masih Hanna Baghdo for the ARAM conference at Oxford University in England. Text read by Michael Fuller at the conference on 19 July 2016. Cite the text as: Fuller, Michael J., Neathery B. Fuller and Abdul Masih Hanna Baghdo "The Churches at Tell Tuneinir and Tell Hassake, Syria" ARAM (Oxford University Press) 2019

View of the ambo facing North. Basalt cobbles can be seen embedded within the paster.

Der-Kevorkian, Shahe
2002 The Early Christian Relationship in the Building Architecture between Armenia and Syria. Translated from Armenian by Dr. Alexander Kishishian, Aleppo.

Hadjar, Abdallah
1991 The Church of St. Simeon the Stylite and other Archaeological Sites in the Mountains of Simeon and Halaqa. Translated by Paul J. Amash. Sidawi Printing House, Damascus.

Kuhne, H.
1990 The effects of irrigation agriculture: Bronze and Iron Age habitation along the Khabur, Eastern Syria. Man’s Role in the Shaping of the Eastern Mediterranean Landscape. A. A. Balkema, Rotterdam.

Parpola, Simo and Michael Porter
2001  The Helsinki Atlas of the Near East in the Neo-Assyrian Period. Casco Bay Assyriological Institute, Finland.

Abdul Masih Hanna Baghdo explains the baptismal font to Michael Fuller during a tour of the site during December 2010.

The chapel of the Tell Hassake religious complex measures 22.5 x 14.5 meters and was constructed adjacent to the south wall of the cathedral. The nave of the chapel measures 8.6 x 12.9 meters; two columns made of basalt stone supported the roof of the nave. The floor of the chapel was composed of a white, gypsum cement. The northern colonnade contains an archbishop’s seat which is made of basalt stone and baked mudbricks coated with gypsum plaster. 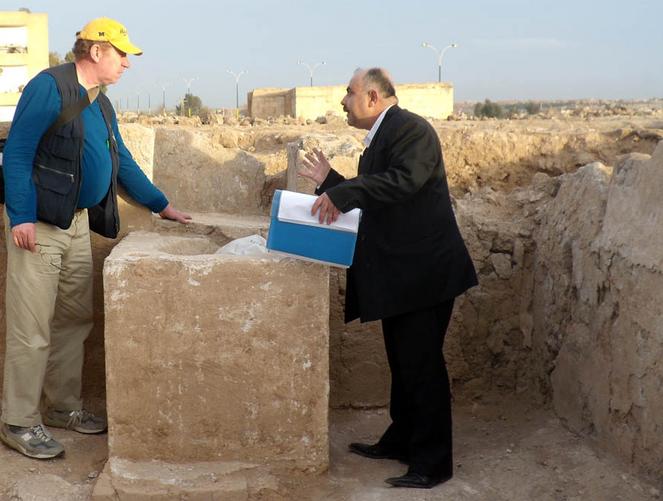 Archaeological excavation began at Tell Hassake in 2008 on behalf of the Directorate General of Antiquities and Museums in Syria; the fieldwork was directed by Dr. Abdul Masih Hanna Bagdo. The purpose of the excavation at Tell Hasake was to establish the role played by the site during the second millennium and the first millennium BC, and to determine whether it should be identified with the settlement of MAKRISI mentioned in the Neo-Assyria cuneiform texts discovered at Tel Sheikh Hamad ancient Dūr-Katlimmu (Kuhne 1990;25; Parpola and Porter 2001: 13).

The excavation at Tell Hassake was conducted during four field seasons (2008 to 2011) in several excavation units with an area of approximately 1600 square meters. Four distinct archaeological layers were identified by the fieldwork.

The topmost (first) layer of Tell Hassake dates to the period of Islamic Arab civilization. The second layer dates to the Byzantine civilization and the third layer is Roman in age. The fourth layer dates to the Neo-Assyrian period. In the first layer, stone foundations from the time of the Mamluks were built directly on top of mudbrick and stone structures belonging to the Ayyubid Period (12th – 13th centuries AD). Glazed pottery, tannurs (bread ovens) and plastered basins were directly associated with the Ayyubid Period walls.

The Second layer, dated to the Byzantine Period, contains an Eastern Christian religious complex including a cathedral, a chapel, and a cemetery. The structures in the second layer were constructed in the Early Christian Period (4th century AD) with basalt stones held together by a gypsum mortar. The Christian buildings were rebuilt twice and remained in use until the 11th century AD. 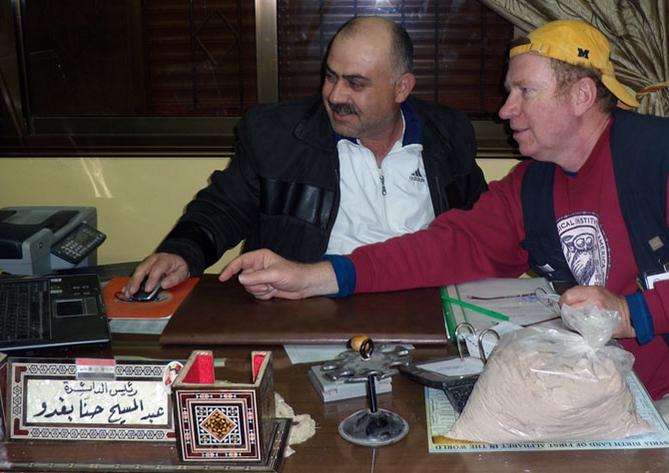 A seal made of plaster covered this area and was engraved a symbol of the cross in the middle with a frame around it (Figure 17).